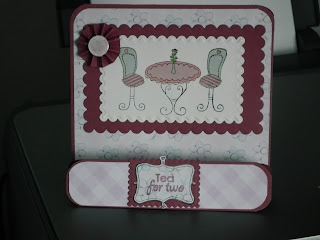 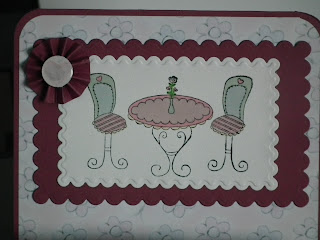 This is an Anniversary card for Ian and Denise, good friends of ours that we used to work with.

I folded a long piece of card to give a main part to the card and a little easel part at the base.

The background paper is all from the Crafters Companion (TM) S.W.A.L.K CD 1.

I die cut on the Grand Calibur (TM) the white card for the stamped image and the burgundy layering piece using some Papermania (TM) layering dies.

The stamp is from Dovercraft (TM) and is from a Tea House stamp set called "Tea for Two".

I made a rosette using a long piece of card that a zig zag folded and then added a heart embellishment which I made using the punches and acrylic circles from Papermania (TM) and an image once again from the Crafters Companion (TM) S.W.A.L.K CD 1.