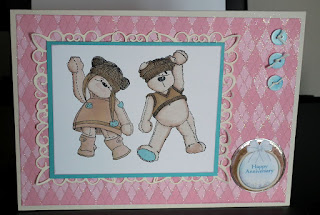 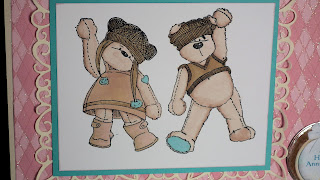 This card was made by using a buff colour base card.
I used a BO Bunny (TM) set of papers and stamp that I received as a free gift.

The Bo Bunny background paper was glittered, which I must admit looks better in real life!

I backed the Bo Bunny image on to a blue background and coloured it in using Letraset Pro Markers (TM).

I used a Marianne (TM) die to back the image in a cream coloured paper.

I used Pro Marker (TM) on white buttons so that the colour would match perfectly with the central image and put a raffia ribbon through each one which matches nicely the die cut frame colour.

The sentiment is taken from a DO Crafts Papermania Digital Designer (TM) CD which I put on to a die cut silver circle.