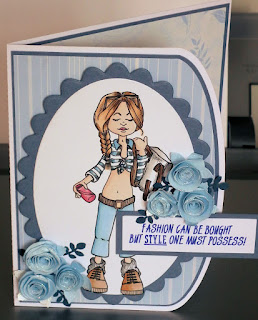 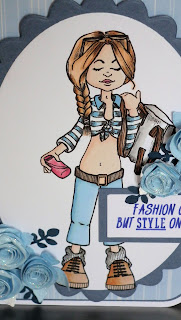 I used my "Complete Cardmaking" magazine, issue 38, to make this card.

The mag comes with a free CD each issue and I printed out the girl, coloured her in using Letraset (TM) Pro Markers and used some background papers from the Papermania (TM) capsule CD which I mat and layered on to a shaped card and dark blue card.

The roses were made using a circle punch which I cut in to spirals and then added a little glitter to sparkle them up!

I added some punched leaves and then using my Silhouette (TM) Cameo machine I made the sentiment which I copied from the magazine and matted it on to dark blue card.