I know, I have been neglecting my blog! 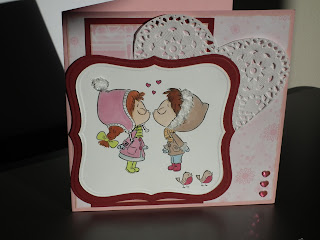 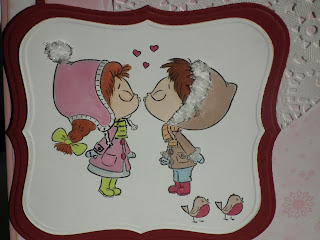 The card was made for a December Anniversary card for John's cousin Billy, and his lovely wife, Margrete (not that Billy is not lovely, obviously!).

I always get stumped by this time in the year as to what card to send them, I think that my mind is just in Christmas card mode!

I used a base salmon coloured card.
The background papers were both form a Crafters Companion (TM) Swalk CD.

I used a die to cut the layer for the stamped image, coloured the image in with Letraset (TM) Pro-markers, there's a first, not!!

I added some £1 bargain snow glitter to the hats and bobbly bits.

The heart shaped doily was just one in my stash and then I added some Papermania pink heart gems to finish.

Hope they had a great Anniversary and that they enjoyed the card.